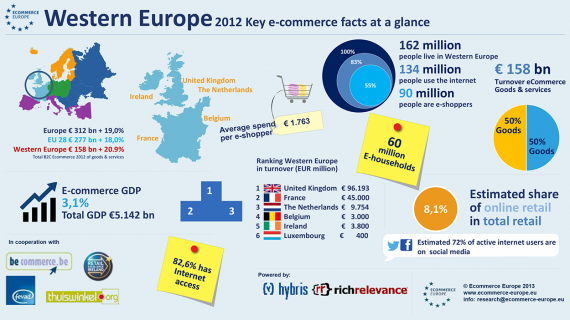 The Western European region, including Belgium, France, Ireland, Luxembourg, The Netherlands and the United Kingdom, is now in first position for e-commerce size, with a 51% European market share. In 2012 the total B2C e-commerce economy of Western Europe amounted €158.1 billion, a 20%+ growth compared to 2011. Online sales of goods and services are forecast to reach €173.8 billion in 2013, a growth of nearly 10% in comparison with 2012.

Ireland is in fourth place and will reach total sales of €4.6 billion in 2013 and is one of the fastest growing e-commerce markets in Europe. Irish consumers are buying online above the curve with 25% sales growth year on year. However, in 2012 25% of Irish online spendings went overseas due to lack of choice.

Belgium is showing relatively the lowest online sales, respectively €3.0 billion in 2012. However, Belgium is expected to grow with 20% in 2013 and is therefore an upcoming e-commerce market.

Netherlands has an internet population of 94%

In 2012, the Western European population was estimated to be 162.3 million (19.8% of Europe’s population). Internet penetration in Western Europe (83%) has been above the European (66%) and EU28 average (76%) in 2012. The top three tier having internet access is being led by the Netherlands with 94%, followed by Luxembourg and the United Kingdom with 93% and 83% respectively.

The average Western European e-household spends a total of €2,625 online in 2012. This is far above the European average of €1,400 and EU28 average of €1,696. The United Kingdom leads the way with €4,010 on e-household expenditure. The United Kingdom has the biggest online spenders in Europe. Within Western Europe Ireland and Luxembourg follow with €2,861 and €1,955 online expenditure respectively.

Meanwhile Belgium (€836) and The Netherlands (€1,365) have a considerable gap when it comes to online expenditures per e-household. In Belgium e-commerce is still growing strongly and the country is expected to catch up quickly. The Netherlands is considered more mature and the high density of physical retail is limiting the need to buy online compared to other countries.

Within the next few weeks, Ecommerce Europe will publish three other Regional Reports next to the Western European B2C Ecommerce Report, regarding Central Europe, Southern Europe and Eastern Europe, all with an outlook on 2013 projections.

An abstract of the Western Europe B2C Ecommerce report can be downloaded online via
https://www.ecommerce-europe.eu/facts-figures/western-report/download-the-free-western-light-version-report. The reports are powered by hybris and RichRelevance.