All around the world, e-commerce is gaining popularity. In 2013, around 4.1 billion consumers from all regions found their way to the Internet and the majority of them purchased goods and/or services online for a total amount of $1,552bn. In comparison with 2012, this represented an increase of 23.6%. For 2014 a growth of 22.9% is forecast, resulting in a global B2C e-commerce turnover of $1,907bn. A year later, B2C e-commerce is expected to grow by 18.0% to reach $2,251bn. 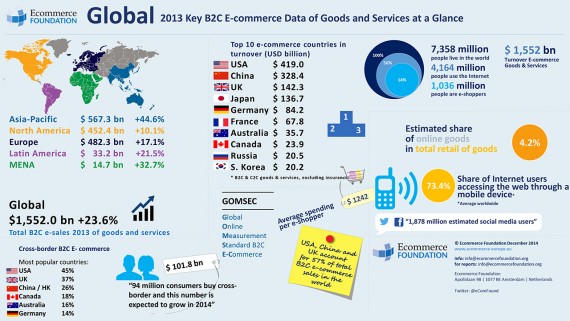 This is all revealed by the latest Global B2C E-commerce Report that was published under the auspices of Ecommerce Europe. The report is created by the Ecommerce Foundation, a non-profit organization which helps both companies and industries to improve their e-commerce activities by doing practical research and by facilitating knowledge sharing and benchmarking. Figures in the Ecommerce Foundation reports are based on the Global Online Measurement Standard for E-commerce (GOMSEC) and established in cooperation with national e-commerce associations and GfK.

At a total B2C e-commerce turnover of $482.3bn and $452.4bn, respectively, Europe and North America are among the top regions in this regard, but in 2013 they were overtaken by Asia-Pacific for the number one position. For a large part thanks to rise of China, the Asia Pacific region accounted for B2C e-commerce sales of $567.3bn.

Even though the gap between the top 3 and Latin America ($33.2bn) and MENA ($14.7bn) is considerable, it is clear that these regions are making good progress as well. As a matter of fact, with respective B2C e-commerce growth rates of 21.4% and 32.6%, Latin America and MENA are the fastest growers behind Asia-Pacific, which boosted its B2C Internet sales by an astonishing 44.5%. And as the European and North American growth lagged behind a little, it is not surprising that Asia Pacific is now the proud leader in terms of e-commerce.

With total B2C e-commerce sales of $419.0bn, the United States is still the clear leader in the world, but the emergence of second-ranked China is remarkable. Partly due to the success of e-commerce giant Alibaba, Chinese B2C e-commerce grew by 78.5% to $328.4bn. For 2014, China is even forecast to surpass the US and become the world’s new leader in terms of e-commerce. Behind these two countries, there is a considerable gap to the UK ($142.3bn), Japan ($136.7bn) and Germany ($84.2bn), which complete the top 5.

With regard to the most important emerging countries, China (78.5%) is again among the top nations. In fact, only Indonesia was able to realize a stronger growth as the island nation doubled its B2C e-commerce turnover to $2.8bn. Russia ranked third with a growth rate of 50.5%, followed by Mexico (41.4%) and Kuwait (37.0%).

People from North America and Europe were on average the biggest spenders in the world last year, as they spent $1,928 and $1,828, respectively. In comparison, in Asia-Pacific the average e-consumer spent $1,268 in 2013. With regard to the online expenditure per e-shoppers in countries, the UK ranked head and shoulders above the rest in this regard. At $3,471, the Brits are ahead of the Americans ($2,216) and Australians ($2,167).

“The way in which the Chinese e-commerce market is growing is very impressing. From a B2C e-commerce turnover of $23.4bn in 2010 to $328.4bn in 2013, the country has almost closed the gap with the global leader, the United States. For 2014, it is even forecast that China will overtake the US for the top position,” says Wijnand Jongen, Chair member of the Executive Committee of Ecommerce Europe. “When we take into account that China is not even in the global top 10s of expenditure per e-shopper and Internet penetration, we can all but conclude that Chinese e-commerce is only at the beginning. It will continue to grow in the next few years partly because more Chinese consumers will find their way to the Internet. In addition they will be willing to spend more money online as they will grow more familiar with Internet shopping.”

More information on the global e-commerce market will be available in our Global B2C Ecommerce Reports, which will be published in the fall of 2014.