With projected online sales of €39,5bn for 2013 and an average annual growth rate of 23% since 2009, the e-commerce market is a beam of hope for the crisis-struck Southern European Region on its path out of the recession. Goods and services sold online in Southern Europe in 2012 amounted to a total value of €33,5bn, making up more than 10% of the total online sales in Europe, reveals the latest Southern Europe B2C E-Commerce report by Ecommerce Europe, the European umbrella organization for online retailers. Figures in Ecommerce Europe reports are based on the European Measurement Standard for Ecommerce (EMSEC). 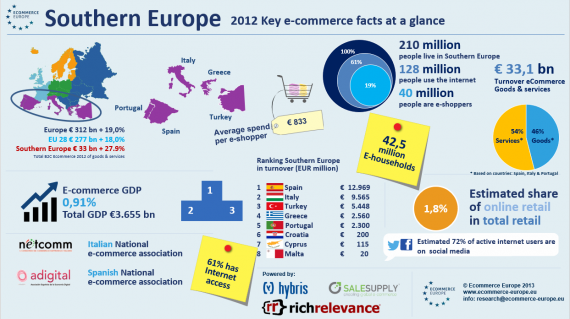 Spain tops the list with nearly €13bn of e-commerce sales in 2012, Turkey’s e-commerce is the fastest growing

On average, Southern European online shoppers spent €833 throughout the year 2012. Average expenditure is thus below the EU28 average of €1.347 and the European average of €1.402. The Greek are the biggest spenders of the region, having generated transaction worth €1.347 in 2012. With an average expenditure of €864, the region’s largest e-commerce economy Spain only ranges fourth behind Portugal (€979) and Cyprus (€885).

“As we can see from the results published in this latest Southern Europe B2C E-Commerce Report, the region is full of opportunities for online retailers: Spain is boasting the highest e-commerce turnover, but when we look at Greece, we see a pretty impressive annual online expenditure per capita in 2012, while Turkey’s growth rate in 2013 outperforms the European average by 100%. Now is the right moment to step in these markets and start growing e-commerce success”, says Wijnand Jongen, Chair Statistical Board Ecommerce Europe.

Within the next few weeks, Ecommerce Europe will publish two other Regional Reports next to the Southern European B2C Ecommerce Report, regarding Central Europe and Eastern Europe, all with an outlook on 2013 projections.

An abstract of the Western Europe B2C Ecommerce report can be downloaded online via: http://www.ecommerce-europe.eu/facts-figures/free-southern-light-version-report. The reports are powered by RichRelevance, Hybris and Salesupply.