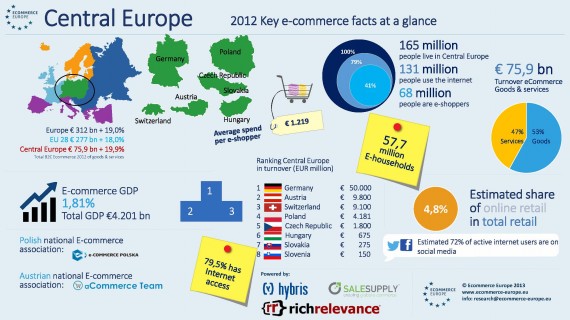 Central Europe generated 24.4% of Europe’s e-commerce turnover
The report defines the region as consisting of Austria, Czech Republic, Germany, Hungary, Poland, Slovakia, Slovenia and Switzerland. An in-depth analysis including infographic is offered on the largest markets of this region: Austria, Czech Republic, Germany, Hungary, Poland and Switzerland. The region‘s share in Europe’s total e-commerce turnover in 2012 (€311.5bn) is 24.4%. 58 million of the region’s 165 million inhabitants are already using the internet for online purchases.

Germany, a giant in transition

Germany is by far the largest country in the Central European region. With its e-commerce turnover of € 50bn, it makes up 65.7% of the region’s total e-commerce turnover. Internet penetration in Germany is with 85% very high, and consequently Germany has the largest online population in Europe with 69.6mn people. With a younger, internet savvy generation hungry for foreign trends and embracing the digital lifestyle, Germany is moving away from its long standing retail and mail-order traditions towards being a true e-commerce growth hub. The impressive 22% growth rate confirms this trend.  Foreign players such as Amazon are already very well established in the market. On the other hand, Germany is the birth place of very successful international e-commerce companies, such as the former mail order giant Otto or the fashion pure player Zalando.

Small but powerful: The Austrians and the Swiss lead in online expenditure

Poland is showing the strongest e-commerce growth
Poland is the growth leader in the Central European region, with an average increase of 24% over 2012. Hungary, Slovakia and Slovenia were estimated at 880mn, 330mn and 180mn respectively, a combined average growth of 23%. Growth in Germany was 22%. The Czech Republic will reach €2.1bn this year, a growth of over 19% over 2012. The feeblest growth is recorded in Austria and Switzerland, both with a growth rate of 12%.

Throughout the past weeks, Ecommerce Europe has published comprehensive Regional Reports on B2C Ecommerce in Eastern Europe, Southern Europe, Northern Europe and Western Europe. The reports are powered by RichRelevance, Hybris and Salesupply and the light versions can be downloaded via www.ecommerce-europe.eu.

An abstract of the Central Europe B2C Ecommerce report can be downloaded online here.