With an average growth rate of 35.7% over the year 2012, the e-commerce market in Eastern Europe is comparatively showing the strongest increase in Europe. The projected online turnover of €19.3 bn for 2013 indicates that there is a lot of ground to gain in the region: Only 27 of 106 million internet users are to date using the internet for shopping, reveals the latest report on B2C e-commerce in Eastern Europe released by Ecommerce Europe. Ecommerce Europe is the European umbrella organization for online retailers. Figures in Ecommerce Europe reports are based on the European Measurement Standard for Ecommerce (EMSEC). 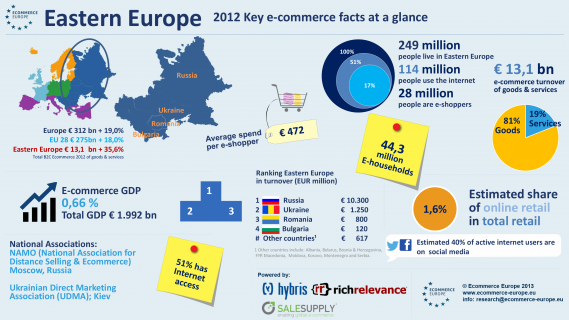 27 Million online shoppers
The report defines the region as consisting of Russia, Ukraine, Romania, Bulgaria, Albania, Moldova, Belarus, Bosnia & Herzegovina, Montenegro, FYR Macedonia and Serbia. An in-depth analysis including infographic is offered on the three largest markets of this region: Russia, Ukraine and Romania, respectively boasting an e-commerce turnover of €10.3 bn, €1.2 bn and €0.8 bn. The 27 million e-shoppers of the Eastern European region generate a total turnover of €13.1 bn. The
region‘s share in Europe’s total e-commerce turnover in 2012 is 7%.

Russia stands out head and shoulders
Often referred to as the “sleeping giant”, Russia already stands out with head and shoulders above the other countries of the region. The largest single market in Europe boasts the largest online population with 68 million internet users and 20 million online shoppers, generating a lion’s share of 78.5% of the regions total e-commerce market. Ukraine ranks second with total sales of €1.25 bn, followed by Romania with an online turnover of €0.8 bn. Russians spent on average €515,- on the internet in 2012, whereas Ukrainians spent €510,- and Romanians €400,-.

Ukraine shows strongest growth rate, Romania highest internet penetration
With an average growth of 47% over 2012, the Ukrainian e-commerce market outperforms its regional neighbors Russia (35.5%) and Romania (33.3%). When it comes to internet penetration, Romania leads the way with a share of 54% of the population, followed by Bulgaria with 51%. Russia and Ukraine are on par with 50%.

“There is a lot of potential in the Eastern European e-commerce market. First of all, only 27 million of 162 million inhabitants are shopping online – a percentage bound to increase once internet penetration is picking up pace. As demand will rise across this region, logistic services will improve, enabling retailers to serve also the less urbanized areas. Especially in a country like Russia this opens up a market of millions of new customers”, says Wijnand Jongen, Chair Statistical Board Ecommerce Europe

Within the next few weeks, Ecommerce Europe will publish one other Regional Report next to the Eastern European B2C Ecommerce Report, regarding Central, with an outlook on 2013 projections. The reports are powered by RichRelevance, Hybris and Salesupply.

An abstract of the Eastern Europe B2C Ecommerce report can be downloaded online via: http://www.ecommerce-europe.eu/facts-figures/free-eastern-light-version-report.